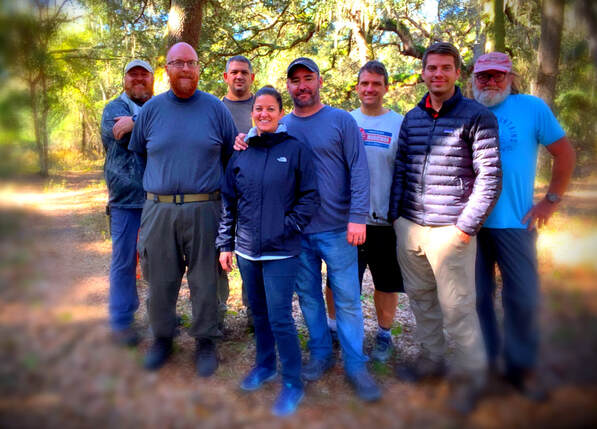 ​BODACIOUS BARE BONES TEAM
A behavior analyst, a defense attorney, a CPA, a communications expert, a special education teacher, and a second analyst comprised a recent Bare Bones course - and, what a course it was! The students had cold temps, an all-night rain (talk about sleep deprivation - everyone stayed dry sleeping ... it was the noise of the rain on the tarps that kept everyone awake most of the night), a gorgeous moon, lots of deer. and there was terrific team work and camaraderie. Great jerky, great rabbit cooking, not-so-good sling shot shooting, great individual shelters, great individual fires, and the map & compass work was right-on. Congrats to Anita, Derek, Andy, Josh, Frank, and Drew!

THE SIX ITEM CEO
It all began with a call from his wife. Private training for one - her husband. As a birthday gift. A very nice gift. Huge, but with restrictions of a minimal sort: he could only bring six survival items, as well as the shoes on his feet and the clothes on his back. Welcome to the Florida wilderness - home to over a billion trillion gazillion annoying mosquitoes (and other pesky bugs), sweltering heat, and humidity that will make what you're wearing wetter than if it had rained. His choice of items: a tarp, some line, a metal water bottle, a metal cup, a ferro rod, and a knife. Food? Nope. Mosquito netting? Nary a tad did he bring.  And, the mosquitoes were in-mass, every day, especially in the morning, afternoon, evening, and all through the night - squadron after squadron after squadron. All that said, the training went extremely well - with splashes of proper preparedness tossed here and there. Who would have known that a CEO of a prominent east coast hospital would leave the woods as one of our best students ever? Without a doubt, in the Top 3 for sure. He was amazing. Almost Clark Kent-like. He even asked the location of the nearest phone booth. (Just kiddin'.) Emmitt and Byron were both in awe of the fact that this guy goes about his daily business in a tailored suit, yet here he was, out in the wilderness with minimal gear, exhibiting the highest caliber of outdoors behavior. His PMA (Positive Mental Attitude) was purely bodacious. "He was Navy SEAL-like," said Byron. "His mind was wide-open to learning. And, he was extremely humble." 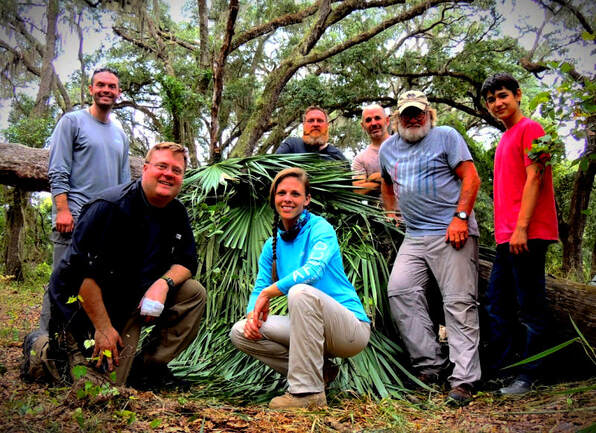 TOTAL THUNDER FUN
Four days and three nights in the Florida woods. Modern comforts - such as A/C, electricity, and the favorite sofa, to name a few - have been left behind. Hats-off to Kristen, Tom, Chad, Patrick, and Alex, our most recent grads of the Total Thunder. There was rabbit skinning and cooking, making jerky, map & compass, lots of shelter building, and making fire individually, three times, using three different types of tinder: dried grass, monkey hair from a palm, and pitch wood dust. And, there was the improvised slingshot challenge. Folks, if this bunch is shooting at you with slingshots, just stand still. And, congrats to Kristen for two special reasons: 1) she's on her way to Army Aviation School (including SERE training) to become a helicopter pilot; and, 2) for being the Total Thunder's top scorer. 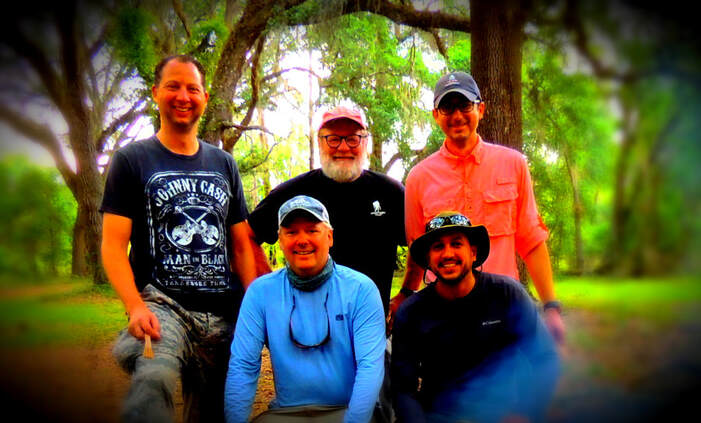 PRIVATE GROUP GROOVES
A retired Air Force pilot now flying the skies for Fed Ex, a senior director of planning at Fanatics, a general manager with a prominent food distribution company, and a computer engineer - all friends - got together for a Bare Bones experience and had a bodacious blast in the Florida woods with Byron. With a steady flow of fine evening cigars, the group excelled in all things survival, including their first night's challenge of a free-standing (no trees) group shelter, using two ponchos, 50-foot of para cord, and natural materials from the forest. The jerky was a success, as was their rationing of their limited food supply. Fire-building, shelter construction, and map & compass skills were quite bodacious. Kudos to Jake, Spencer, Carlos, and Fernando for an excellent display of teamwork and positive mental attitudes, especially when it came to getting sleep surrounded by hordes of mosquitoes - thank goodness for the person that invented bug netting. And, special congrats to Jake for being top scorer and winning the trinket - a bucket lamp. Whaat? ​
WHATTA HOCUS POCUS
​Six students participated in our 3-day survival and escape & evasion course: a barber, a security officer, a pair of power linemen, a physician, and a H.S. senior. Two of the men were six-foot-five. How about being that big and trying to hide? But, they did it and did it well. All of the teams evaded so well that it frustrated our aggressors to no end - the Florida wilderness was thick and overly abundant with lots of hide-behind vegetation. On the survival side, their skills in making fire and shelters were outstanding. Bodacious congrats to Hardy, John, Jr., Matt, Christy, Robert, and Carter. And, special thanks to the following: Hardy - for being a superb group leader; Carter - for being top scorer and winning the top trinket: a custom-made leather pouch; John, Jr. for coming in second (after a tie-breaker of a butterfly knot with Hardy) and winning the "jump back" jerky box; and, Anita - our pilot - who performed an awesome flyover and tried her best with the drop (an orange bag with a rock and note inside). Last we seen the bag, it was headed through the trees for the bottom of a swamp dern near 100-yards away. Whatta Hocus Pocus!